← Behind the Scenes: Emmanuele Bassi
Glade 3 sees the light of day →

You have almost certainly heard of Google’s Summer of Code, but perhaps you haven’t heard of the Women’s Summer Outreach Program, which is also being run by the GNOME Foundation this summer. Davyd Madeley teams up with Hanna Wallach to find out more.

This year GNOME received 181 submissions for Google’s “Summer of Code” – not one was from a woman.

This imbalance is hardly surprising though. In 2002, it was reported that a staggeringly low 1.5% of libre software contributors were women, compared to roughly 28% in the proprietary software world. This disparity has numerous causes. For example, the 2006 FLOSSPOLS report found that the age at which men and women are able to start tinkering and installing free software on their own computer can differ significantly. Girls, on average, typically receive their first computer at age 19, as opposed to boys at age 15.

Working closely with the GNOME Foundation, developers Hanna Wallach and Chris Ball put together the Women’s Summer Outreach Program. The program aims to promote the participation of women in GNOME-related development. “It was clear to us that the GNOME community can’t be the inclusive group we want it to be without putting in some effort,” said Chris. Funded with money received by the Foundation for participating in the Summer of Code, the program originally offered the chance for three applicants to receive a stipend of US$3000 to work for two months on a mentored, GNOME-related project. The only requirements were that the applicant was a female student and wanted to work on a kick-arse development project.

A key issue at stake is male domination in the libre software movement, where GNOME is no exception. While six new female developers won’t make a staggering amount of difference to this problem, Chris and Hanna are hopeful that the program will still have a significant amount of impact. In the short term, GNOME will get six awesome women working on six exciting projects. Longer term, they hope that the program participants will continue to actively participate in the GNOME community, encouraging other women to get involved as well. One of the major things missing from free software right now are strong female role models. It would be fantastic if the WSOP changed this for GNOME.

“We’re not trying to artificially raise the percentage of female GNOME developers up to 50%;” Chris emphasizes, “we’re trying to start a bootstrapping process that gets some female developers involved with GNOME in a way that will create a positive feedback loop.”

An impressive 100 applications were received from femme devels spread across the globe in just under a fortnight. “We had far more applications with excellent technical merit than slots to fill; all of the applications on our shortlist were extremely high in quality,” Chris told GNOME Journal. In fact, the applications were of such high quality that Google stepped forward to provide the funds for three additional projects, bringing the program up to six participants.

Unfortunately, not everyone who applied for the WSOP could be chosen. “We’ve been thrilled to see that several of the applicants whom we weren’t able to accept have mentioned wanting to work on their proposal on their own,” said Chris. An unpaid mentoring scheme has been proposed as part of the successful GNOME Love project. This scheme, taking many attributes of the mentoring from Summer of Code and WSOP, would allow both men and women to undertake mentored work in the GNOME project.

The Foundation hopes that the WSOP will act as a pilot program for other organizations hoping to make more women feel welcome in their development communities. Perhaps the most important outcome is that this program be seen as a clear demonstration that things can be done to encourage women to participate in open source, even in what has traditionally been considered an exclusively male arena.

Of the 100 applicants, six were chosen to participate in the WSOP, each based on the quality and utility of her application. The participants come from 5 different countries, and include both undergraduate and graduate students. 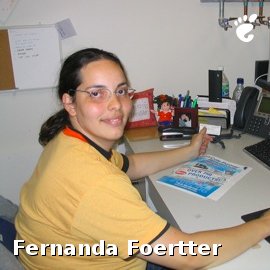 Fernanda Foertter was born in Brazil, but is now a citizen of the United States. With a physics major under her belt, she is now doing a doctorate in materials science at the University of Florida. Her project is gJournaler, an “iTunes-inspired” cataloging system for PDF journal articles. “Two years of grad school is frustrating,” Fernanda explains. “You have to read hundreds of papers and have no real good (open source) solution to catalog them.”

Ümran Kamar is an undergraduate computer engineer from the Izmir Institute of Technology in Turkey, now in her fourth year of study. She is working on an Evince plugin for Mozilla-based web browsers. Ümran hopes to be an ambassador for Turkish women in libre software.

“There are many women programmers interested in Linux in my country, but they lack the courage to join projects and lead the women’s community. I am expecting this project will be a landmark for the Turkish women’s community, helping them to be more confident in joining Linux-based projects,” she told GNOME Journal.

Cecilia González is at the Politechnical University of Catalonia (UPC) in Barcelona and is also in her fourth year of her computer engineering degree. Since she started using free software, she has wanted to contribute to the community. With an interest in performance, her project will be to work on optimizing the switching of components in the Evolution groupware suite.

“I find the GNOME community very human and always interested in our work; I feel happy to be working in a such project.” she says, “It will be great if I can participate actively in the community after the WSOP.”

From McMaster University in Ontario, Canada, Clare So is in the first year of her PhD in computer science. Her project is to define and implement formula editing functionality in the GtkMathView widget, used to display MathML in AbiWord and other applications. She is also interested in looking at research aspects of her project.

“It all started from my summer employment in 2002 at the Ontario Research Center for Computer Algebra,” she writes in her blog, “Since then, I have been interested in various topics in Mathematical Knowledge Management, which includes research in MathML-related technologies.”

Monia Ghobadi is an Iranian studying at the University of Victoria in Canada’s British Columbia. She has been working towards her masters in Computer Science since September last year. She got involved with the WSOP because of an interest in open source software development and because she wanted to learn about Linux programming. Being new to North America, she missed out on the Google Summer of Code, and GNOME’s WSOP gave her a second chance to be involved in such a great program.

Monia is working on integrating GNOME Terminal with GNU Screen, a console based “screen manager” that multiplexes multiple interactive shells onto a single terminal. “My mentors are incredible. The community is wonderful. I’d love to remain a part of GNOME,” she replied when asked how she found working with the rest of the GNOME community. “I’d like to thank GNOME and encourage all the students to participate in these programs,” she added.

Maria Soler is from Catalonia in Spain, but studying in Aarhus, Denmark. After doing three years of mathematics, she decided to study electronic engineering. Having completed her engineering degree, she will start a specialist course in industrial software this August. Her project, syncing Tomboy notes between computers, is a chance for her to make a useful contribution to the free software community while learning Mono and C#.

Maria had previous experience with the GNOME community through the GNOME Translation Project and the Catalan translation team.

Already, the program has been a huge success. All six participants say they are enjoying working with the GNOME community and that their mentors have been really positive and encouraging. They all hope to remain part of the GNOME community after the summer’s program is over.

“I want to thank GNOME and Google for giving women an opportunity to shine in the developer community,” wrote Fernanda, “I hope the open source community will begin to see the benefit of encouraging more women to participate.”

You can find out more about the WSOP from the press release and project page on the GNOME.org website:

The FLOSSPOLS report and recommendations are available from:

If you want to follow the progress of the six participants, a WSOP planet has been set up:

Hanna Wallach is in the final year of her Ph.D. in the University of Cambridge’s Inference Group, working on Bayesian inference for machine learning problems. In her not-so-spare time, Hanna contributes to both GNOME and Debian, and is involved in several projects that encourage women to participate in free software development. Her favorite video game is Rez.

Davyd Madeley is an undergraduate computer scientist and electronic engineer at the University of Western Australia, who moonlights as the GNOME Applets maintainer and a writer for GNOME Journal. Among other things, he produces the popular GNOME “sneak peak” articles. He collects plush penguins and plays the tenor saxophone. He’s also the subject of another article in this issue of GNOME Journal.

Discuss this story with other readers on the GNOME forums.

← Behind the Scenes: Emmanuele Bassi
Glade 3 sees the light of day →